Free food is now available in a South Dallas food desert. On a recent balmy Saturday afternoon, half a dozen people gathered on the corner of Second Avenue and Scyene Road, a few blocks south of the South Dallas Cultural Center and Fair Park. They were there to set up the second of two free food pantries in the area.

The pantry is part of the efforts of the local chapter of Food Not Bombs, an organization that draws its name from a Martin Luther King Jr. quote about military spend outweighing social programs. (“A nation that continues year after year to spend more money on military defense than on programs of social uplift is approaching spiritual death.”) One of the many mutual aid organizations to take root in Dallas in recent years, its goal is to help provide much-needed nutritional sustenance to underserved communities.

“We moved into the neighborhood last September,” says James Magruder, one of the founding members of the Dallas chapter. “I’ve been driving every day past this abandoned building that’s just sitting here rotting. So, my want was to make some use out of it and put a pantry up here that helps the neighborhood out.”

The group on hand filled a single blue metal locker that they placed on the corner with canned vegetables and fruit, mixed nuts, crackers, Pringles, KIND bars, split orange masoor dal and whole black urad dal. All of the items were donated either by friends or community members as well as a couple of area Sikh temples. 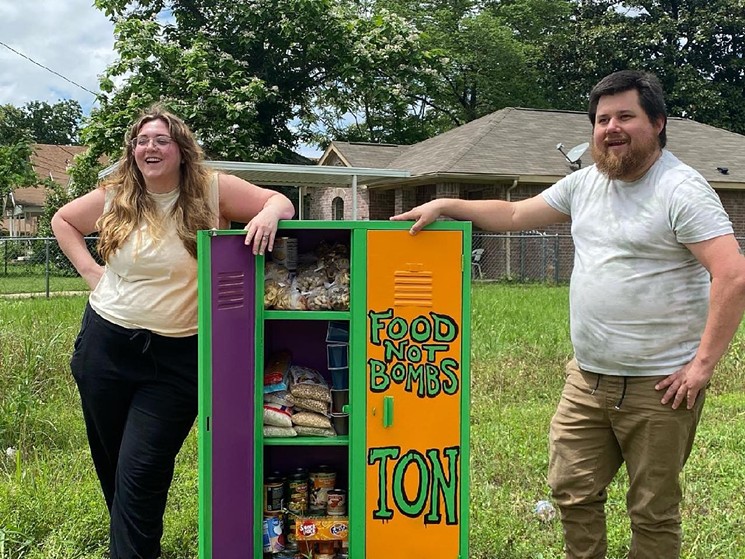 James and Kathleen Magruder founded the local chapter of Food Not Bombs and have established two food pantries.

This is the second such pantry set up by Food Not Bombs in Dallas. Its first pantry is in the Bonton neighborhood, not far from Lincoln High School and about a mile south from their second location. They replenish the pantries as needed but have discovered that their original one is somewhat self-sustaining, with the community keeping it stocked.

Support the independent voice of Dallas and
help keep the future of Dallas Observer free.

Aside from the pantries, they also provide free meals with donated produce, leftovers or food that would otherwise go to waste to Camp Rhonda homeless encampment and through vegetarian and vegan potlucks on weekends.

“Since there are so many community gardens happening — Harvest Project, Oak Cliff Veggie Project — we get a couple bags from them and cook with that food,” says Kathleen Magruder, James’ wife. “There’s a lot of community-based happenings.”


That communal aspect is a tenet of the mutual aid organizations in town. Food Not Bombs also works closely with the Dallas Houseless Committee, United People’s Coalition, Feed the People and Dallas Harm Reduction.

“A nation that continues year after year to spend more money on military defense than on programs of social uplift is approaching spiritual doom.” – Martin Luther King Jr.

This isn’t Magruder’s first foray into mutual aid and Food Not Bombs. He was involved with a couple of groups when he was younger. They were unfortunately short-lived.

“You know, we rescued a lot of bagels from Einstein’s and that sort of thing,” he says.

His efforts have grown since those early days. The group will continue to serve meals on the weekends and is looking to establish more pantries in the future. It’s the belief of both James and Kathleen that food is a right, not a privilege.


“It’s about neighbors helping neighbors, you know,” James says. “It’s about solidarity with people that haven’t been given a real chance. This isn’t a charity; this is about bringing us all up together.”
Anyone interested in lending their time to help the efforts of Food Not Bombs Dallas can fill out a volunteer form.


Those wishing to make financial donations can do so via Venmo (@NFNB-DALLAS), PayPal (NFNBDALLAS) or Cashapp (NFNBDALLAS).